Who is this green man? 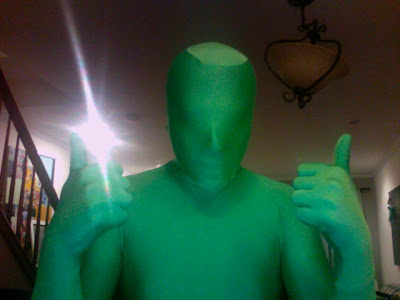 Surely you recognize the character from this:

Here's a hint: He spent the entire summer on tour, just got back late Monday night, and has three - yes three - gigs today/tonight for Halloween with three, yes three, different bands - where he'll also be playing guitar and bass (who knew) before taking off for Russia and Turkey on Wednesday...

Okay, I know it's obvious.

He played the slot drum in the audience of a Stephen Stills concert when he was four years old and stole the show from Stephen;

He met Captain Noah in person right after he was potty trained but got so excited he pooped his pants, anyway, and made a public announcement:

I recently learned he used to eat Reese's peanut butter cups for breakfast and lunch at school, even though I slaved in the kitchen half asleep at 6:00 a.m. and packed him four course meals in his little lunch bag... 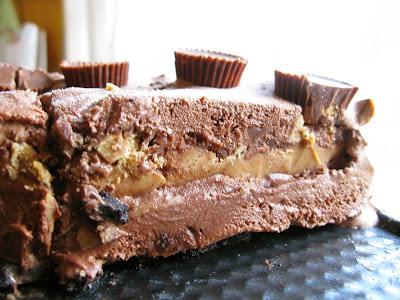 (Yes, Google images actually yielded me someone insane enough to have made a Reese's peanut butter cup sandwich, which, in retrospect, had I known about...har har...not that I spoiled my kids or anything...)

So in case you haven't guessed by now, and here's hoping you are lucky to see him at one of his gigs tonight dressed as such...Greenman is... 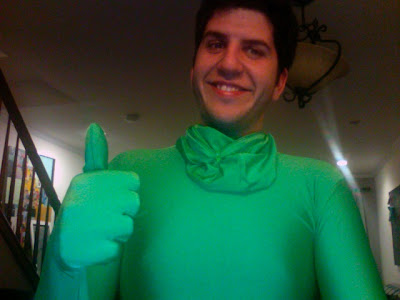 My favorite son (not including the dog)...Eric Slick!

Eric always comes through with the most amazing costumes, doesn't he? And I know he's thrilled to be home and not touring for the first time in years on Halloween, even if he is technically working (though I don't think he ever considers playing music "work").

And now for my annual torture - do I or do I not eat an entire bag of miniature Almond Joys tonight? I'm thinking of being a grinch this year and turning out all the lights and not answering my door so that I don't need to have any candy in the house. But then I remember how I hated those mean neighbors when I was a kid trick or treating, and I so, so, so never wanted to be one of those people. Now I could do something tricky like buy candy I don't like to give out, but as it turns out, THERE IS NO CANDY I DO NOT LIKE, DAMN IT.

And don't ask me to put Gary in charge. He will promise to keep the candy away from me but I can wear him down. That, and I find every hiding place he's ever thought of - he just isn't a devious guy and after over thirty years, I know how his brain works. "Oh Robin will never think of looking in the washing machine since she hardly ever does the wash."

I know about your hiding place under the sink, too, and I also know where you hide your own candy in the corner cabinet where we keep the oatmeal and dried fruit but luckily you really do buy yourself crap - who enjoys Jujyfruits for Christ sake? 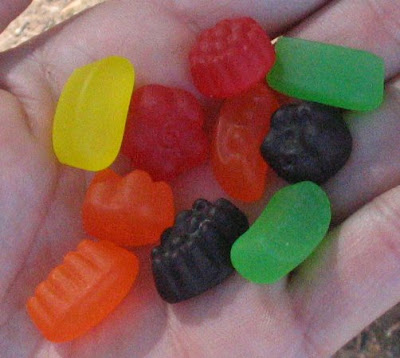 I'd even take a Dum Dum sucker over those. (But I am happy when I find your contraband blister peanuts so continue to knock yourself out, dear)