What the Adrian Belew Power Trio Does Prior to Going on Stage...

Tonight, in real time...right before they take the stage at Radio, Radio in Indianapolis...see the Adrian Belew Power Trio in pre-show warm-up mode...hahahaha...can you feel the love?

Sent via the genius of Julie's new iPhone...

"Adrian and the Slick siblings (Eric on drums and Julie on bass) took the stage well after 10pm and proceeded to kick major booty. Adrian's fluid screaming guitar, Eric playing thunderously on a small but massive-sounding FOUR piece kit and Julie sounding grooving and slinky on that bass. They do a sort of jammy funky progressive rock thing. I can't wait to order their live CD....

...it was obvious the AB Trio was enjoying themselves too. I bought a t-shirt and got the band to sign it and said hi and stuff.

It was great to see a packed house for this sort of obscure artist. Indianapolis needs more nights like that if we're to attract better artists in the smaller venues.

Anyway, if you like King Crimson or good fusion type music, check the linked site for more dates. I think you'll enjoy yourself."

"Took in the trio last night at The Canal Street Tavern in Dayton Ohio in their opening show of the midwest tour....Ade's in perfect form and the kids [Julie and Eric Slick] are on fire as well...not sure what the complete set list was but they closed with 'Three of a Perfect Pair' and 'Thela Hun Ginjeet' and they both absolutely smoked....his 'solo' improv midway thru the set was awe inspiring...highly, highly recommended show if they play near you!!!!"

(Note from our author: The "set list" is their new about to be released CD, e!)

From the Talk Bass forum:

"Adrian Belew was a lot of fun. Miss Slick lives up to her namesake."
***
"Adrian Belew concert tomorrow at Radio-Radio. Julie Slick is bad-a$$!!"

"Very good player. Her and her brother Eric on drums killed as the rhythm section for Mr. Belew tonight here in Indianapolis. I had about zero idea of what to expect and was gladly blown away.

Sadly, she was mixed too low in the mix at first. But what I could hear I loved. And as they pumped up the volume later in the show I could hear her much better. She sounded slinky and groovy.

The show was a blast, catch them if you can."

"Adrian said tonight @ the Indy show that it (new CD e) will be out before the end of July. Heard A, B & E tracks tonight and it sounds like it will be an album to definately play repeatedly. Was a great show, never had a bad Adrian show. You can tell they are really comfortable with each other and played around on stage...."

And finally, just so you know, you really get some glamorous breakfasts while on tour. See? 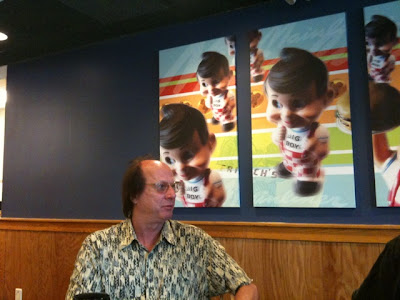 Ha! Will add more reviews as I find them today...

Ooh ooh - like this one, from Faith Cohen, just received via email:

"Oh Robin, I had Too Much Fun last night.... Just about the first person I saw was your darling Gary, who is sweet as sugar. The club was full, and the show was fabulous. Your kids were amazing...It is such a joy to see adrian's eyes when he plays with them. I have seen him play with a lot of folks, but playing with Eric and Julie, he is "home". You can tell he is in awe of the musical souls packed in those young kids. Really, it is so obvious that their virtuosity and taste come from a different place than any school of Rock. My best friend, Jo Ann and I were up front all night, right in between Adrian and Julie, and she was amazing to watch..... I could not get over the ease and the beauty of it all...."

Ha ha - even though this was just added to my comments section by Jennifer Johnson, I had to post it here, too:

"I went to the Dayton and the Indy show and both were amazing. I also ditched my Paul McCartney tickets to see the Power Trio."

Whoa...she ditched Paul for the ABPT Trio! That one just had me reeling!

Also just in...and this made me laugh out loud...Gary called me and told me a guy came up to him and said (about Eric, obviously): "What did you feed that boy? Bruford Juice?"

Whoops - one more thing - a newly discovered Project Object review, which is too long to post in its entirety so click on the link...but this cracked me up: