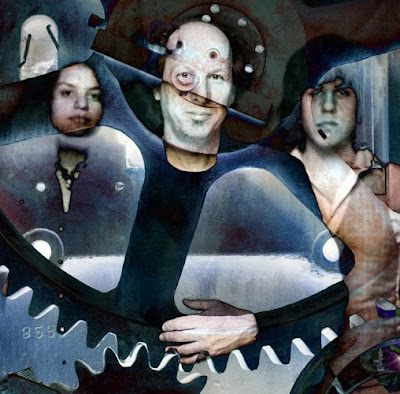 Adrian Belew has worked with some of the biggest names in music, from Frank Zappa and David Bowie to Talking Heads and King Crimson. However, he's also formed projects such as The Bears and his new Power Trio with lesser-known musicians.

"With The Bears, we were friends early on and that was a different situation from Eric and Julie, which was serendipitous," Belew said during a recent telephone interview. "I had written a lot of material with the idea of the Power Trio and I had arrangements of some of my old material, but I couldn't find the right people. When I was just about ready to give up on that idea, I accidentally met Eric and Julie and everything just fell perfectly in place."

"I couldn't believe it," he said. "It was like something dropped out of the sky. It wasn't so much that they were undiscovered, it was simply that musically and otherwise it works so perfectly together. It still does."

The talented team made their recording debut with Belew on the album "Side Four Live," which was recorded at Canal Street Tavern in 2007. Their studio debut is the new Power Trio album "e," an ambitious five-part piece derived from a 16-note chromatic figure that can be played forwards and backwards in various keys.

"It is very difficult, but I think it's nice," Belew said. "It's thematic. It's kinda like a symphony for a rock trio. I think some people will really like it ... I hope. We were playing three of the pieces live before we recorded. We just rehearsed a few days on the extra pieces and, you know, Eric and Julie are just amazing.

"They played the stuff just really perfectly. It was pretty impressive. I thought I would trip them up a little bit more than I did, but they're too good for me. They're pretty special, as everybody will see when they come see them play. They're mature beyond their years, that's for sure."

"We really like playing at Canal Street," he said. "It's a great vibe. I think we're going to have a great audience as usual. And it will probably be the first night anyone can buy 'e.' Somebody there might buy the very first copy. Wouldn't that be something?"

So I just wanted to get this post up early...I have much more to say...will be back...