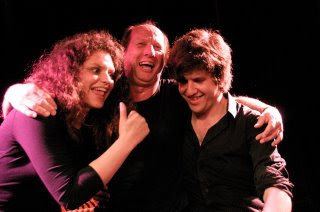 Adrian Belew is out on the road again — this time with friends. Adding Eric (drums) and Julie Slick (bass) to form the Adrian Belew Power Trio in May 2006, Belew's take on funk/boogie has never sounded better. Five cities into their fifth tour in three years, the Trio have the energy and chops of a more veteran band.

There were some technical difficulties, though. Midway through the nostalgic opener, “Big Electric Cat,” Belew’s gear went dead and he had to come up with new ways to entertain the crowd, throwing a few dance moves into the mix.

Supporting their new album e, Belew and the Slick siblings flowed as easily as cold beer on a hot day. They played two songs from the new album, “a” and “b” (guess what the rest are titled), which, on the whole, sound like exercises in musical technique and jazz-funk.

One of the featured techniques was Belew's much-celebrated “playing with himself,” where he records himself performing measures and then looping them back again as new creative sections. This musical onanism made the simple trio sound much bigger than they were. Especially enthralling was Julie's bass playing, which were put to the test on Belew's old King Crimson bandmate Tony Levin’s complex parts.

After playing with Talking Heads, Frank Zappa and Nine Inch Nails, Belew's electro-funk soundscape seems more musically pure. He performed with the intensity of the younger greats, not someone coming up on his 60th birthday. He slipped easily into King Crimson's “Dinosaur” and “Young Lions,” throwing on the gas after “Neurotica” into “Of Bow and Drum.” The core set finished with another track off the new album, this one called “e,” a wonderfully calibrated road boogie.

An encore of the eminently jammable “Futurevision” capped the 105-minute set.

Local jazz-funk trio Cuda, Renko, & Cuda — manned by Chris Cuda (guitar), Steve Renko (drums) and Tony Cuda (bass) — opened and, for the most part, kept the audience entertained. Sounding like a incoherent mix between Dream Theater and Joe Satriani, they displayed a technical knowledge of boogie but weren’t quite polished. Their strongest number was their last: "Safari," a sprawling, polyphonic, quadra-signature opus. —Gerard Nielsen"

That was a very cool read - thank you, Gerard.

Okay, I'm not feeling 100% today and I have some great photos to post once I'm able to hopefully get my act together, but reviews of the Adrian Belew Power Trio are coming in from Cleveland so let me post that in the meantime...

Oh hell, I can't help myself. Before I launch into more words, here are some photos from Radio, Radio Saturday night, taken by the lovely and very talented Faith Cohen: 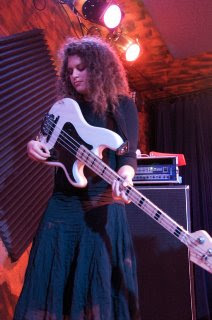 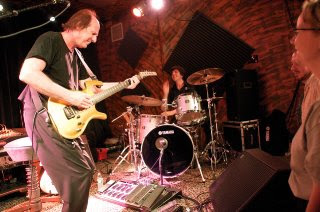 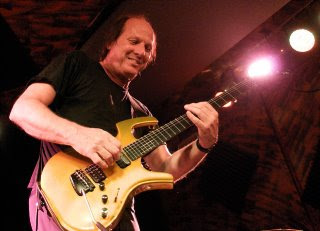 And also, very important - the trio play the last show on this first leg of their summer/fall tour tonight in Chicago. They'll be at the fabulous Martyrs, and I believe tickets are still available right here!

Okay, now on to the review...and once again, assuming I am not in the fetal position this entire day, I will be editing to add new items as I hopefully find them or even better, people email them to me...

Tuesday afternoon at work, I made the spontaneous decision to take Wednesday off and go see Adrian Belew in Cleveland, at the Grog Shop, to be exact. I had previously wanted to go, or at least thought about going, but then ended up not requesting a vacation day from work or anything. All of the sudden on Tuesday around lunch time, they posted a sign-up for voluntary days off. I pondered it for about a half hour and decided "You know what? Let's do this thing."

I got home from work, got gas, had dinner (Hardee's) at like 4:30, took a shower, never did get a nap or anything. Drove up to Cleveland. Picked a good time to leave and arrive, as the opening band (Cuda, Renko & Cuda, who also opened for Project/Object last Sunday) was doing their last song.

In addition to its titular leader, the Adrian Belew Power Trio consists of Eric Slick (erstwhile Project/Object drummer and apparent occasional reader of this journal, or at least the ridiculous P/O show reviews) and his sister Julie Slick on bass.

I'm glad I decided to go. Man was it worth it. It was an evening of truly insane, wild guitar, mesmerizing powerhouse drumming and bong-rattling ($1 to Homer Simpson) boot-up-your-ass bass.

They played some brand new stuff ("a", "b" and "e" from the forthcoming e), cool Belew solo stuff ("Big Electric Cat", "Young Lions", "Of Bow and Drum", "Futurevision"), and a couple Crimson jamz ("Dinosaur", "Neurotica"). I'm mostly able to recall this because I scribbled down what was on the set list (I didn't manage to grab one of the three, but someone was kind enough to let borrow their's for a moment to write it down), though not everything on said list was played ("Thela Hun Jingeet" was listed in the encore area of said list, but was so very sadly not played.) Belew also laid down an unaccompanied solo guitar excursion at one point, and Eric got to whip out a badass drum solo, rocking so fierce as to dislodge the mallet from his bass drum pedal. This wasn't the only technical difficulty of the evening, as the opening "Big Electric Cat" got a little extended vamp while Adrian and he whom I assume was a roadie tried to figure out why the guitar signal was lost (original diagnosis: dead 9v battery. actual cause: dunno).

My only regret is that I didn't wear earplugs to this show. I intended to (I still have two pairs of earplugs from when me and Sharon and Mary saw My Dad is Dead at Now That's Class that one time, where I got said earplugs just because it was so damn loud in there and the sound was so godawful fucking horrible), then when I was in Canton somewhere, I realized I never pocketed them. Aside from being, you know, LOUD, I think I would have been able to hear and appreciate a good deal of Belew's insane playing were the sound a little filtered before hitting my ear drums. He and it was still great, though. He was obviously having loads of fun on stage. And man, what a gee-tar player. Hell, what a kick-ass band. They put the power in power trio. CORNY. But seriously, those three musicians in conjuction did things that just kick my brain in the ass and kick my ass in the, um, ass, I guess? Since I was, to be honest, only familiar with a certain portion of the stuff they played, I couldn't completely discern which parts were more structured and which were more improvised, but it was all good. There were obviously improvised moments (but still structured, as such, if that makes any sense, which it doesn't, and I know because I just read it and it doesn't say what I'm trying to say, but I can't find the words to say it better) that kind of degenerated into wild, screaming, pounding abandon. Not in a bad way, obviously. In such a way that you think if it goes an inch or two farther, it will collapse into total chaos, but the band just snatches the stream of ear-pummeling sound from the abyss and throws all their fierce energy and forward motion behind it.

I hoped to get to chat with Eric Slick, as I guess we're acquainted in some fashion now (see previous entries) and I did, at a later point after the set. Prior to that, after seeing the Trio return from the backstage area, I retreated to my car to fetch a little something and returned to stand over by Adrian Belew and several people he was chatting to and answering questions for. I just wanted to introduce myself to him, tell him the show was great and everything and maybe get him to sign something for me. But as is so often the case, I didn't want to be too intrusive, since he was talking to other people. But Eric came over, gave me quite a friendly greeting and sort-of-in-a-sense introduced me to Adrian, adding "this guy writes the most insane, in-depth Project/Object show reviews".

Somewhat predictably, the item I wanted Adrian to sign for me was King Crimson's Discipline lp. That record came out the year I was born, my dad had a copy of it which he played often when I was a wee lad, and I've more or less loved every minute of that record since I was a kid in freaking grade school. I told Adrian this as he signed the record cover for me. If I had a decent digital camera, I would take a picture of said cover for this journal entry, just cuz I think it's pretty rad. (Maybe one day I'll have to do a little collection of stuff I have signed and make a facebook photo album of it or some such rot.)

As Eric was breaking down and packing up his drums, I went over just to say hi again, wish him well and tell him I was going to be on my way, but we ended up standing on the stage, talking for like 20 minutes, about Project/Object, drummers, Zappa Plays Zappa, Joe Travers and other such things. Have I mentioned it's very gratifying to me that he reads and has read my show reviews and enjoys them and finds my descriptions and opinions interesting? Tis. At this point, I guess I mostly do the big P/O show posts because it's sort of an obligation now, but I try to make them amusing, if only for myself half the time, because I know the number of Zappa fans and people who would be interested in the least on my friends list is a pretty limited one. But I still do them. Eric, if you happen to be reading, I very much appreciate the kind words. I'm glad you enjoy the posts and that you (as far as I'm aware) haven't been somehow bothered by criticisms of the shows and, in fact, even agree with me on some of those things. So, yeah, thanks.

It's now about 4:15 am. In an hour and fifteen minutes, my alarms will go off. I should sleep at some point."

So a fun write-up of the Cleveland concert, and it comes to you courtesy of this guy (ha ha - thank you, kind sir).

And yes, Derek, Eric does read your reviews, so does Julie, and so does Adrian Belew and Andre Cholmondeley of Project Object. You can thank ME later. Ha!

Anyway, must go stretch out in bed until my head stops pounding. But there will be more...

Later,
xo
Posted by RobinSlick at 8:09 AM