A Day of Insane Music featuring, among others, The California Guitar Trio

Have I mentioned how in love I am with the California Guitar Trio? I have three favorite bands right now and they are one of them. The show at the Sellersville Theater, which of course featured @mrericslick and @julieslick (their official Twitter names and if you don't already follow them, you should), was just mind blowing amazing. Two standing ovations, I had chills the entire evening from the magnificent level of musicianship...I can't keep my eyes off them when they play. Like Adrian, they are totally unique and otherworldly...just no one like them in the universe. These photos were taken last year when the California Guitar Trio opened for the Adrian Belew Power Trio so while I do have some new ones from last night which I'll post here as well, these are cooler: 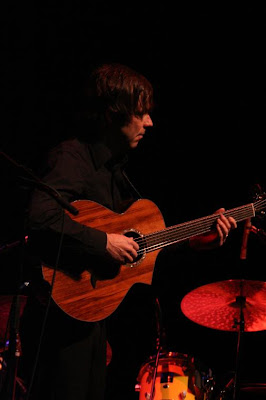 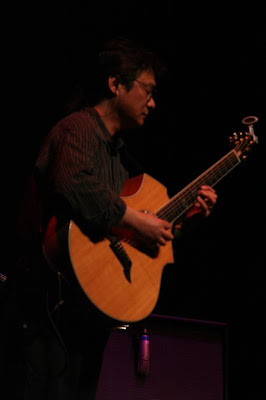 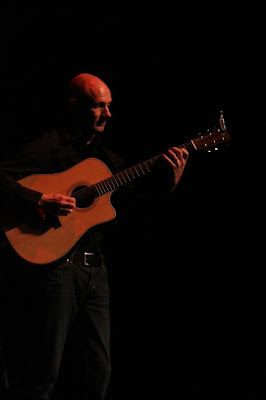 From the Planet Crimson forum board:

So much fun playing with Eric and Julie Slick in PA last night. They are amazing! Driving to Northampton for the show tonight.

"No surprise there. You all know (or should know) what a CGT performance is like by now, so there's no need to repeat the usual stuff. I'll just add that (as with anything they do), the addition of the Slick siblings takes it into another dimension ENTIRELY. We got to hear several new tunes last night, which was a treat in itself, but there was something special about hearing them this way. "Cathedral Peak" is the kind of tune that coasts on a bouncing rhythmic groove, so it's only natural that a rhythm section would make the perfect addition. "In the Middle of Nowhere in the Middle of Texas" was great at conveying that dusty-desert feeling, even before Eric added some brilliantly placed rattlesnake rattles. "Andromeda" - already my favorite of their new songs, and now in serious contention for my favorite ever - was truly otherworldly. And that goes just as much for "Echoes," which was made even more effective by a trippy animated backdrop of stars that wouldn't have been out of place at a real Pink Floyd laser show. Tyler made better use of the visual elements than I've ever seen before with shifting effects timed to complement the songs, plus well-chosen synaesthetic backgrounds: green & blue for the aquamarine stuff, yellow for the surf moments, deep red for "Larks' Tongues II," etc.

Yes, that's right, "Larks' II." When Robin (tease that she usually is) mentioned something about them playing a Crimson song the other day, I'd thought of something from the dual-guitar era - 3PP, "Discipline" or the like. But of course they couldn't do the obvious thing. I should have realized that such a rhythmic track would have been perfect for this lineup. Paul really raised those neck hairs with the eastern-tinged-violin solo, and Bert anchored it all with the most dirty heavy sludge tone I've ever heard from an acoustic guitar. Meanwhile there was nobody to do the Jamie Muir allsorts coloring, but Eric came damn close with all kinds of little cymbal skitters (all in the middle of a bass-drums rendition that would have done Wetton & Bruford proud). Bert said they'd love to have the Slicks play on the CD when it's recorded this summer, so let's hope it happens. It'll really be something special."

In case you do not believe the person who wrote this review, a man who obviously reads my blog and I saw him at the show (How Come You Didn't Come Over and Say Hi? Ha ha - I know, it was late, the place was mobbed, etc. etc.)...here's the CGT/Slick version of Larks' Tongue in Aspic Part 2 to which he refers:

Oh man, as you can see, I have a new widget and now I know how to post songs...this is just too cool.

As promised, here are some shots from the show last night, including soundcheck: 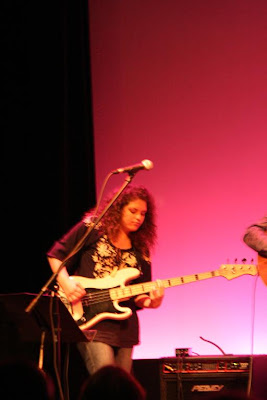 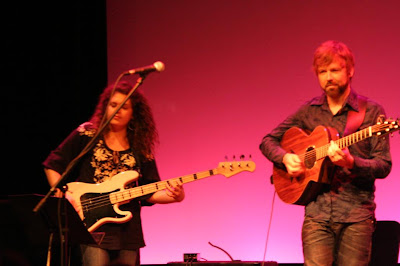 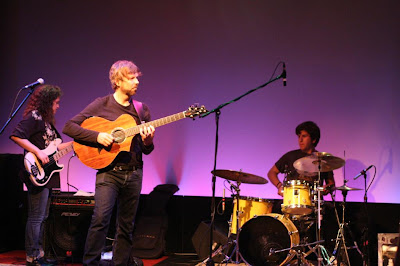 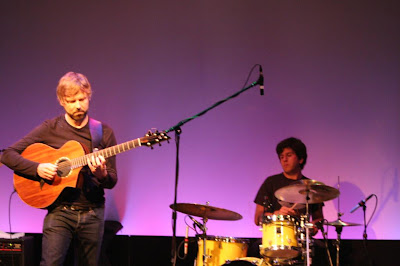 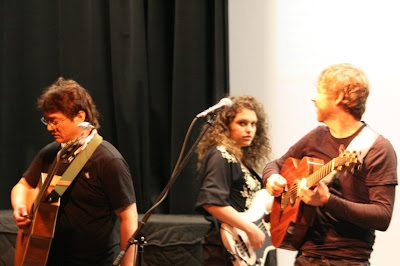 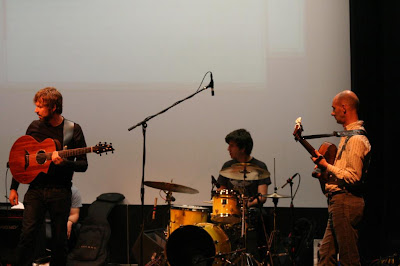 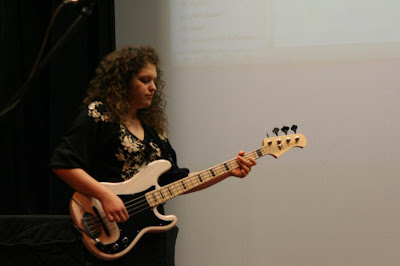 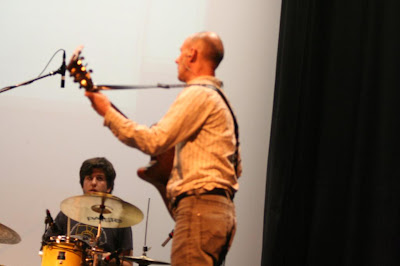 The next two photos were taken during the grand finale, an unbelievable cover of Pink Floyd's Echoes and of course also the title of CGT's latest CD, which you can purchase right here, and now I can't resist posting the version Julie and Eric did with them last night: 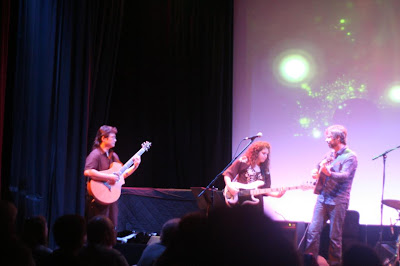 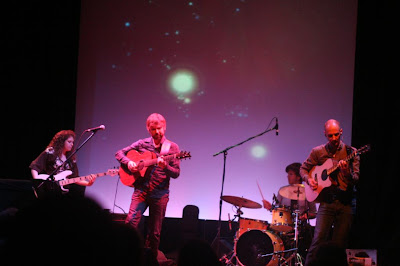 How amazing was that? I think it's a safe bet to say that the CD of this performance will be in daily rotation at Casa Slick for a very long time. Last night was such a high I can't even begin to tell you.

But let me backtrack here and tell you about the entire day.

Eric broke the news to me that even though his show at NEARfest with Oblivion Sun wasn't until 1:30, we had to be at the venue by 9:00 a.m at the very latest for sound check because the first band went on at 11:00 a.m. And yikes, on a sunny day the venue was an hour and a half from our house, but in a monsoon like it was that morning, we were looking at more like two hours. In other words, we had to leave at dawn knowing he had two shows twenty miles and eight hours apart.

So Eric loaded the drums into the car and away we drove into the pouring rain on the Pennsylvania turnpike, where some moron in an SUV zoomed by going 95 miles an hour but not before he tried to cut us off, causing Eric to have no choice but to swerve big time to avoid a collision at which time his drums came tumbling forward along with a sliding box of his drum hardware weighing, oh, about five hundred pounds, and yeah, you guessed it, the entire left side of my body was the lucky recipient. We were so shaken, though, that pain was secondary. We just sat on the shoulder of the road for a few minutes, trembling at our brush with death.

So we get to Nearfest and please, I mean this in the nicest possible way, it is really "Nerdfest" and trust me, don't take offense to this remark because I am the world's biggest music nerd, too, but anyway, even the guitarist/vocalist of Oblivion Sun stood in front of the mic and cracked a joke (while the bassist changed a string which snapped after the first song) which went like this: "Why do seventy year old women love Nearfest?" Answer: "Because it's the only day they can clean out their basements." 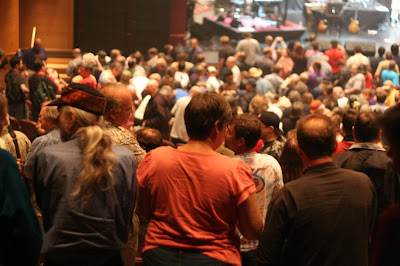 I seriously believe the reason for the mature audience is because of the stupid label prog rock. Anyone who loves quality music, anyone who KNOWS music, would have been thrilled by this three day festival. But I guess the word "prog" has a stigma...and then I ended up hearing that this fest has been around forever and the same people go every year, so maybe that explains the lack of youth, too. One funny thing, though. There's an indoor parking garage adjacent to the auditorium (it's part of Lehigh University) where the event is held, and that's where fans tailgate. Yep. Parking the car was an experience...tons of people in the indoor lot sitting on lawn chairs, and then, the funniest thing ever, a big bad police officer who came through on foot like the gestapo knocking on car windows.

"What are you doing in there? You smoking weed?"

Erm, no. They were caught eating chocolate or jelly donuts maybe, but smoking weed...nope, didn't smell any. But they did have beer with their donuts.

See? I really am a nerd, too. No worries.

Anyway, a very cool moment -- Gary Green of Gentle Giant, who is a big Adrian Belew fan and has seen Eric in concert a couple of times, came out and introduced the band. 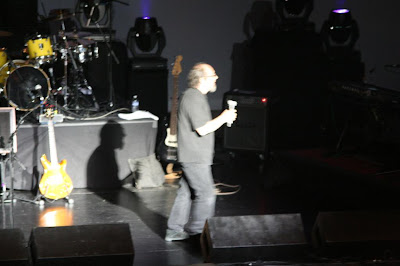 And the band itself: 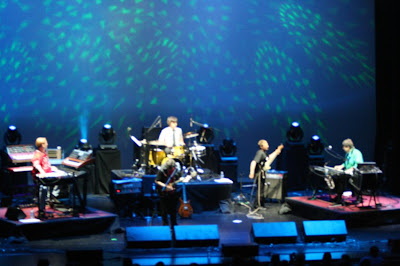 Excellent band, very creative, and nope, not going to use the word progressive. The crowd screamed for an encore at 3:10 and I hyperventilated, knowing that Eric had to be 20 miles away by 4:00 p.m. for sound check for the California Guitar Trio, but it all went well and despite the continuing monsoon we got there ASAP, and oddly enough, met up with Julie and her significant other, Matt, who arrived from downtown Philadelphia at exactly the same time.

As I said, the CGT show was beyond incredible; I adore the Sellersville Theater, and all I can say is, if you are anywhere even remotely nearby, please come out and see Eric, Julie, and Adrian on August 26 where they will be performing "e".

By the time we left the Sellersville Theater, it was past midnight, another hour's drive home, and I don't think I was ever more exhausted in my life, but there was one person far more tired than I was: Eric. The poor boy played two shows and Eric being Eric, practiced non-stop in between, so he was toast.

And that was my day of insane music. I am sure some more California Guitar Trio and Oblivion Sun reviews will pop up shortly and when they do, I'll add them in.

Thanks again to CGT for inviting Julie and Eric to join them on stage. It was a brilliant evening.