So I could name drop and tell you everyone Eric Slick and Adrian Belew are hanging out with at NAMM this weekend, besides each other, har har, but photos speak a thousand words or something like that. And I lifted the following from the Paiste website...as I've previously posted on billboards all over the internet, Eric endorses their cymbals:

The booth hosted three autograph signings today; each one was very busy with fans waiting up to an hour to meet some of their drum heros. It was one Saturday at NAMM that will not be forgotten." 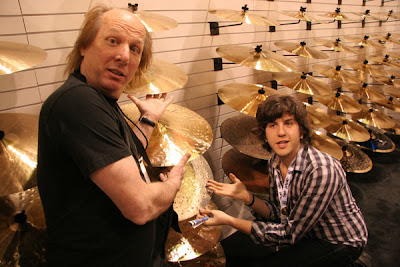 Ho hum, if you click on the Paiste link, you'll see everyone else with whom Eric rubbed elbows. He also nonchalantly mentioned he spent an hour hanging out with Danny Carey from Tool.

Oh, before I forget, check out these magnificent You Tubes of the Adrian Belew Power Trio really rocking out -- these popped up on the web the other day and are actually Part I and Part II of an extended Beat Box jam.

So the reason I've been among the missing is the stomach virus from hell last week - not a good winter for me so far, if anyone is keeping track that makes two viruses and one back thrown out in less than three months but there you have it, bad luck does come in threes and I figure I'm home free now.

And feeling well enough to talk about dinner at Julie's on Monday night which was right before I came down with this devil bug. She made lovely roasted vegetable pot pie: 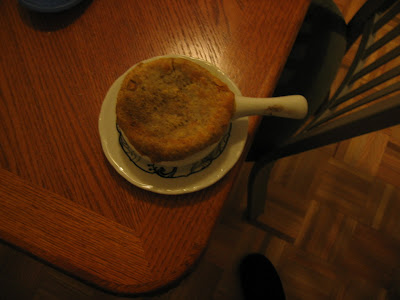 Julie never does anything half way - the bottom crust contained a porcini mushroom puree and the puff pastry dough was rubbed/encrusted with toasted fennel seeds. Truly amazing. She's having me over for dinner again tomorrow evening and I believe it will either be eggplant lasagna or eggplant rollatini. Either one will be fine with me -- Ms. Julie truly rules in the kitchen and her new apartment rocks - she tells me she finally finished hanging up all of her artwork (she can do it all) so I'll be taking some photos to share later this week.

Did I mention Eric was also at Julie's and he drove to dinner? Yes, now Adrian can no longer open ABPT shows by saying his drummer and bass player still live at home and neither have their drivers' licenses. Sob...hate to tell you, Ade, but both have moved out - Eric, last April; Julie, last month, and Eric is now behind the wheel as well. Ha ha - Ade will come to love that on the next leg of the US tour when he can sleep in the passenger seat and let Eric chauffeur the trio while Julie cackles in the back seat with the iPhone, looking up restaurants in the area. Oh to be a fly on the wall for that one...

Anyway, I'm going to sign off Blogger for now but once I hear from Eric and get some more stories from NAMM, I will most definitely come in and add to this post. In the meantime, now I have a new problem. I am definitely having too much fun with Twitter...so I am off to have a cup of coffee and see what my cyber pals are up to there. I've come across some incredibly interesting writers/artists on my travels through Twitter world - definitely worthy of a post of its own.