A Review of Side Four Live!

I just woke up and am sitting here with tears (of happiness) running down my face because of this newly posted review of Side Four Live:

Writing on the Wall erupts like a volcano on a primordial landscape. The thundering sound makes me feel like some kind of Primusaurous Erectus is coming to scoop me up and devour me. Fast as punk and tight as a fine Swiss watch. Suddenly, another Dinosaur rears its head for an old familiar Krimson cover. The bass is masterfully executed, the drums are precise and deliberate. Adrian's voice is powerful as he delivers every note with convincing passion. Pretty freakin' good for an old guy. Oh, and the guitar... Oh, yea... and did I mention the bass? What really stands out on this track is the bare foot pretty's phenomenal frettery. Wow! Queen Crimson.

I had always hoped of one day seeing and or hearing Les Claypool play Ampersand live with Belew... this is probably better. &... I've never been satisfied with the way the song ends. Next, Adrian introduces his masterful young musicians who have just made such an impression on the audience (and listeners at home like me). Young Lions sounds as though the trio has played together for a decade. Adrian's guitar solo roars and reminds everyone what they're there for. He manages his custom-made Parker Fly guitar as though it is an extension of himself. No wonder Beat Box Guitar was nominated for a Grammy a couple of years ago. Infused with a touch Krimsonesence, it really grooves, and is a lot of fun to listen to too. It sounds like the band is having a great time... like three kids in a sandbox. One of the most beautiful songs in the sides series is Matchless Man. The lyrics and backwards guitar give this piece a bit of a Lennon flavour.

Next the band plays A Little Madness. I wonder how mad folks feel about the title. I don't think they'd like it, but I do... really... what, do you think I'm Krazi? In a couple of months, I'm going to Drive all the way to San Fancisco to see this dynamique trio because they're not coming to the vegetarian and barefoot-friendly Santa Cruz. The Slicks sit this one out as Adrian commandeers the wheel and takes everyone a Belooperistic adventure. Nice!

One of my favorite Belew songs is Of Bow and Drum, from the Op Zop Too Wah album. I couldn't ask for a better live presentation. Great job. Last November, I was impressed when these three played Big Electric Cat at the Catalyst here in Santa Cruz. Listening to this track reminded me of the excitement in the air that night. From frogs croaking in the jungle to the slick presentation on this disc, there are now lots of versions of Thela Hun Gingeet for the Krimsonnoisseur to enjoy.

Now that I've heard Side Four, I feel like it isn't fair to refer to Eric and Julie Slick as kids any longer. They've proven themselves. Any band would be thrilled to have either one of these exceptional performers in their ensemble... Adrian Belew is fortunate to have both of them. He'll have to work hard to keep up with these two.

I have to wonder what is next for the Twang Bar King now that the Sides are complete...

and what of the siblings Slick?"
*******
I can answer that for you, sir. They will be touring tirelessly with Adrian in 2008, there will be a new studio CD, and the sky is the limit. Eric will continue to also tour with Project Object and Crescent Moon in his "down time" as well as a whole bunch of other projects he has brewing -- more on that in a future post. Julie graduates Drexel University with a degree in Music Industry; has a state of the art recording studio she built from the ground up, and will continue to record and produce local bands. Her latest accomplishment is the brilliant CD by Cheers Elephant, who, ironically are getting air play on our local NPR radio station, XPN while inexplicably the Power Trio are not. Though I have to tell you, I may chain myself to their studio in a raging protest soon because this station is supposed to be "indie" and promote local bands but so far Gary and I have been feeling like we've been banging our heads against the wall with them and the last thing we want is for the program director to think we are crazed stage parents nagging "ooh ooh, our kids made a CD, please play it on your station". I am hoping with upcoming articles about Julie and Eric in Philly Style Magazine and Bass Player Magazine, maybe they will come to their senses.

Or maybe we can entice them with Gary's Christmas cookies -- to all of you lucky recipients who have received them, I am sure you will agree that those things are the best form of "bribery" in the entire universe.

Speaking of Eric, raves continue to come in from his performance with Crescent Moon on Friday night mentioned in my last blog post, and here is a great photo of Eric Slick and Claude Coleman, Jr. of Ween double drumming: 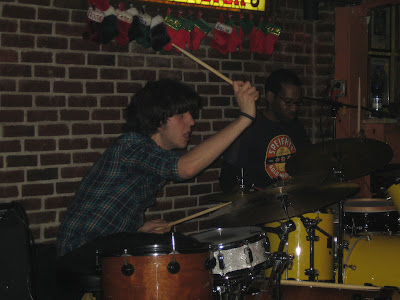 This photo was taken by my pal Joe Maida, and he also wrote a cool review so click on that link which includes another You Tube which ROCKS! Thanks, Joe.

Gary and I have a bunch of photos from that night as well and it was my full intention to post them here this morning but then I saw that Side Four Live review and got so joyously distracted that I will have to upload them later and make it a separate post, okay?

Finally, I am pleased to announce the debut CD release of the Black Lodge Ensemble featuring Eric Slick, Dan Nitz, Dylan McConnell, Mike Long, Gina Gleason, Meg Callen, Foster Longo, Cheshire Augusta, and many more. Here is the link so that you can be one of the first to own a copy.