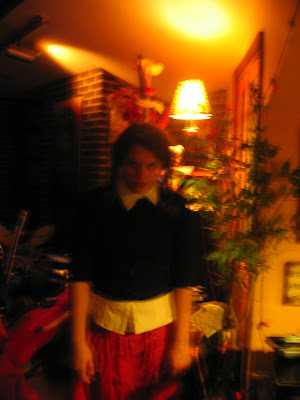 So I cry foul! How can they run the 2007 Best of Blogs Awards concurrently with National Novel Writing Month? How am I supposed to get out there and campaign for votes when I'm supposed to be writing a minimum of 2,000 words a day (yeah, because now I'm so far behind that if I don't write at least 2,000 a day, I'll never make 50,000 by November 30)

What's that? Oh, you mean everyone involved in the 2007 Web Blog Awards is not also participating in National Novel Writing Month? You mean I am the only lunatic...I mean...writer? Out of all those blogs?

But how else do I explain the thrashing I am getting from blogs such as Army Wife/Toddler Mom?

So today I am pulling out my big guns - putting up a photo of my gorgeous daughter in a Halloween costume we threw together at the very last minute the other night because Julie was thinking everyone in the club where her boyfriend's band was playing would be dressed up.

And we couldn't find her black skirt last minute so we substituted orange (you know. Halloween colors?) -- anyway, I'm not sure if she pulled off Wednesday Adams but she did pull off geek pretty well...

(ducking as Julie throws heavy object directly toward my head)

This is a sad but true story. I always dreamed of having a little girl who would let me dress her up and make her cool hairstyles.

From the time she could talk, which was pretty early - age one - if I would go to put her in a dress?

"NO DRESS MOMMY NO DRESS ME WEAR JEANS"

You don't even want to know about the nightmare of her hair.

I wasn't even allowed to make her a ponytail. No barrettes, ever. No pretty bows.

So I thought I would at least get some reprieve on Halloween.

"Would you like to go as a Princess?" I would ask her, hopefully.

"No, I think I'll be a hideous, scary monster," she replied.

"But you were a hideous, scary monster last year!"

"Okay, then I'll wrap myself up in bandages and cover myself with fake blood!"

"I guess I could be a witch. Hey, how about a witch covered in fake blood, with half a cat hanging out of her mouth?"

"Oh my god, Julie. Not only is that gross, witches don't eat cats, and where would we get half a cat, anyway?"

"I already thought of that. We'll use a knife and saw my stuffed Garfield in half. And I'm eating him because he is a stupid cat, not a witch's cat. And...and...he eats lasagna, so he probably tastes really good, too."

Sigh...and so it went. Year after year of gruesome costumes...we even tried taking her to expensive costume stores but all she found there were even more horrifying masks and fake pus and brown teeth...she was in heaven.

So on Halloween this year when she asked me to help her with Wednesday Adams after putting me through twenty-two years of torture, it was all I could do not to jump up and down screaming Yay! Yay! Yay!

But alas, when I went to make her those trademark braids (for the very first time in her life, I got to play with her hair), she said -- and to her credit -- it was sweetly apologetically -- "Mom, you can't brush my hair straight or hardly touch it at all - I just washed it and it's falling in perfect curls."

So I had to carefully section off sections of ringlets and somehow turn them into long straight braids without actually brushing or straightening her hair. As you can see by the above photo, I managed, but I pouted the whole time.

And then she gave me that beautiful smile and said "See, Mom? I'm finally not a monster!"

Yeah, this is some monster:

There's the little ogre -- I mean, Julie Slick, holding Paul McCartney's bass - yeah, that's right - Paul's bass, autographed by Paul and everything -- following a show she did with Adrian Belew on the west coast last year.

Okay, I really need to get back to my "real writing". So once again, I am going to beg you to vote for me. There are only five days left so I won't be bugging you that much longer:

As I instructed before, anyone can vote once a day until November 8 without registering any name, email address or anything...just click on the button that says "Robin Slick"...and here is the "voting booth".

Email ThisBlogThis!Share to TwitterShare to FacebookShare to Pinterest
Labels: In which Julie Slick finally agrees to be something other than a monster for Halloween and I am once again begging you to vote for me as best blogger while I toil away at National Novel Writing Month
Newer Post Older Post Home