I have conquered the beast that is National Novel Writing Month! 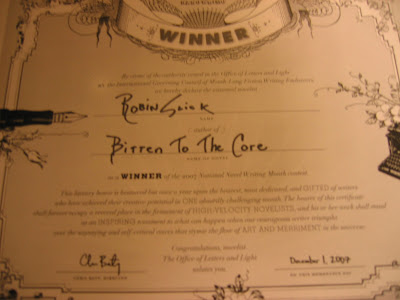 Yes, that is my official Winner's Certificate from National Novel Writing Month, though the actual real one is in color and if I wasn't so technology challenged, I could have added my name and title of my book on line and posted it here the correct way but after struggling for a half hour, I said screw it, printed it out in black and white, wrote my own name in and took a digital pic.

But as you can see by the bright yellow icon on the right hand side here, yes, I did hit 50,000 words yesterday and did conquer the beast that is NANO five days ahead of schedule, although it's my estimation that the book is another 20,000 words from being completed.

I'm really stoked about this book. I started it with no real set outline but yeah, I admit it, I already had awesome characters in place from my prior novels since it is in fact the third in my Three Days in New York City series which I was inspired to write after Hollywood came a-calling in September regarding the first two books in the series with talks about pitching it as a series to HBO along the lines of Sex in the City.

And then the writers went on strike.

So I'm in a holding pattern, but feeling so good about this new novel, which, although part of the series definitely stands on its own, that I may start querying an agent (or fifty) to represent it.

The first draft, or 50,000 words of it, along with my official on line winner announcement, can be found right here and even though I have officially "won", I will continue to add to it until November 30 when it will be hopefully be completed, or should I say the first draft will be finished, anyway.

You would think I'd be really happy about this but I find myself incredibly depressed this morning. Of course that could be because I just spent an amazing four day Thanksgiving holiday with my family, they graciously allowed me the time and space to write over 10,000 words during that time, and now it's Monday, it's pouring rain, and I'm committed to working full time in a law office this week to cover for the aforementioned goddess Donna, who is vacationing until next Monday when she will return for just two more weeks before moving on to her new job.

I have to honestly say if not for Christmas and the fact that I have a guilty conscience over leaving my boss alone and left with massive piles of unfinished wrok, I would just throw in the towel and take the rest of the year off and worry about finding new employment in January, i.e., my original plan of temping just to get out of the house and have pocket money. Because I did find my statement of a week or two ago to be true -- if I am not working at all, I do not properly budget my time or my money. This month, I managed to write a 50,000 word novel while overloaded with and heartsick about work and Donna's imminent departure, a scary spike in my blood pressure which still has me sick as a dog and dizzy, and somehow managing one of the best Thanksgivings of my life.

Okay, that's enough whining out of me.

Hopefully on to better news tomorrow...

Later,
xo
Posted by RobinSlick at 7:05 AM