Project Object on Tour: Tonight in Cleveland -- and they've been SPANNERED! 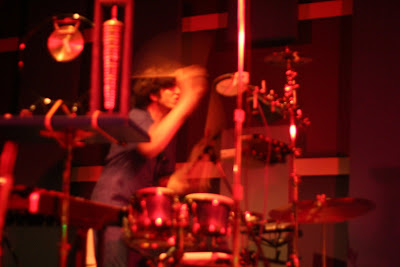 So what a thrill to wake up this morning to a review from the infamous and spectacular UK 'zine Spannered -- one of their reporters caught Project Object's recent show in New York City, and if this doesn't make you want to see the band in Cleveland tonight, I don't know what else I can do!

There are two meaningful Frank Zappa cover bands operating In the UK, each of them excellent in their differing ways. But, as you might expect, The Muffin Men and Zappatistas have their equivalent outfits over in the States, and surely the best of these must be Project/Object, formed in New Jersey, back at the beginning of the 1990s. Whereas Liverpool's Muffin Men have toured regularly with original Mothers Of Invention drummer Jimmy Carl Black (the Zappatistas keep themselves to themselves), Project/Object have magnified this tendency through collaborations with around a dozen Zappa alumni. Their latest spate of dates find them accompanied by singer, saxophonist and flautist Napoleon Murphy Brock, whose key period with Zappa was in the middle 1970s.

Brock has been appearing on the Zappa Plays Zappa tour, fronted by Frank's offspring Dweezil. Project/Object's core five-piece line-up is customarily augmented by other guest players, as was the case for this barnstormer showing at The Lion's Den in Greenwich Village. Andre Cholmondeley plays the FZ role, but isn't tempted into direct reproduction on either the guitaring or vocal fronts. Conversely, the rest of the band have no trouble negotiating the complex high-speed chases of Zappa's pieces, turning in a wondrous glut of authentic mimicry, playing as if the music is freshly inked, so vital is their delivery.

I can't believe the scene as I walk into The Lion's Den. It's the archetypal rock joint, and the band have only been onstage for fifteen minutes, but the crowd is already deep in their grip, a motley bunch in terms of ages, sexes and clans, getting off on the convoluted headbang serialism like it's pop music, which ultimately it is, and Zappa kinda perversely hoped it would end up so. Folks are dancing to the avant garde, and if you've just arrived from a John Cage gig around the corner in Washington Square, this is going to be one of your weirdest evenings ever.

I can't believe this fucking band! Clever contortions, but brutally performed, noodly twists, but heeled in the testes, authentic Zappa reproducing, but including fresh improvisation, and the man's solos, delivered on a fucking electric mandolin, fer chrissakes! Well, on a few numbers, anyway. Cholmodeley takes most of the FZ solos on conventional guitar. Moog maniac Eric Svalgard stares into the face of oblivion, and drummer Eric Slick is the absolute foundation here, a powerhouse of accelerated intricacy. And Napoleon Murphy Brock? He's not around for every number, rationing his appearances out, but when he's there he's singing his high soul croon, or blowing fruitily R'n'B horn, or cool flute jazz-waft.

The Sheik Yerbouti album is clearly a favourite, with tasty versions of Broken Hearts Are For Assholes, Jones Crusher and (best of all) City Of Tiny Lites. Unlike the UK combos, Project/Object are more concerned with Zappa's later, more commercial period. There's not much in the way of early Mothers material here, or even the extended jazzier instrumentals that the Zappatistas enjoy so much. So, there's a neat reading of Tinseltown Rebellion, for instance. But, then it's back to the '70s, for I'm The Slime and Brock's finest moment, Inca Roads. The band play two sets, and the crowd throw themselves deeper and deeper into the music. There's a perfect co-existence of sheer absurdist fun and extreme acrobatic improvisation, and rarely do the four spheres of these, the band and the audience coincide so completely into a beautiful grave-robbing frenzy that's at once nostalgic and supremely of-the-moment.
*****
And here are some wonderful photos taken in Troy, New York on October 11, 2007, sent to me by "Lerch", who also left me a comment on my blog which said:

"I saw Project Object on 10/11/2007 in Troy NY, and it was my first time seeing Eric Play. I had been reading your blog occasionally through my RSS aggregator for a while, and when I mentioned to Eric that I read his mom's blog he said, "NO WAY." What a nice guy and a great player. I've seen P.O. several times and I think this was my favorite show.

I posted on Eric's blog but know you like the pictures so here is a link to the photos from the show! Enjoy and thanks for the great writing; I really enjoy your blog and am delighted to post some pictures and tell you hello!"

Cool! Thanks, Lerch - I really appreciate that.

And there are yet more comments on the Zappa forum board, which are of wicked, wicked pleasure to me:

"Attended the P/O show at World Cafe Live in Philly on Sun night. AWESOME show, very impressed with the musicianship rendered with this line up. I really missed Ike this time but I must say Napolean Murphy Brock filled the task more than adequately. Andre Cholmondeley blew me away on lead guitar, slick was born with hands like a hammer, percussion insane, young guitarist (sorry forgot your name) made a presence and will be our next generation Zappa all star.

Picked up a great CD, Napolean Murphy Brock featuring Gregarious Movement and loved every minute of it on the ride home to NJ. Thanks for the great music Napolean! I look foreward to the next show, long live P/O and the music of Eff Zee."
*****
"I saw Project/Object in Lancaster last night... greatest experience of my life. Too bad there was a poor amount of people who showed up, being a Monday night, but that kind of made it even better for me as a first time live Zappa encounter, as it was so intimate. I got my picture taken with Napoleon, spoke with Andre for a while at the very end (I was the last one out of the club, the 4 security guys were getting pissed at me), and talked to the lovely merchant for a long time also.. bought $45 worth of things. Nap's CD Balls, Cosmik Debris encyclopedia, and the white P/O shirt with Nap and Frank.

I also received a set list from Andre, I'll scan that soon and some photos, video links, etc. Wonderful evening. The concert was about 2 hrs 45 mins in length... 9:30 - 12:30, with a break around 11. I took at least an hour of video. I don't know what else to say. I was astounded. Support these great men and go to the concerts in your area. I know I will see them every time they're here, no matter what. I even regret not going to the World Cafe, as that's not too far for me, and I hear it was an epic night."
*****
In other news, the Adrian Belew Power Trio tour is confirmed and it's a biggie: February 19 through March 16, 2008 and that's just step one in global domination 2008. I will post the venues and cities as soon as I officially have them in my hot little hand but from the original tour schedule I saw a couple weeks ago, it looks like it's a major cross-country deal so a lot of you are going to be very, very happy -- especially those fans on the west coast and those of you in places like Colorado -- but I'd better zip my lip until Adrian and/or Pollstar put up the dates/venues.

I think that's it for now -- stay tuned for some cool news on the writing front!

Later,
xo
Posted by RobinSlick at 6:20 AM