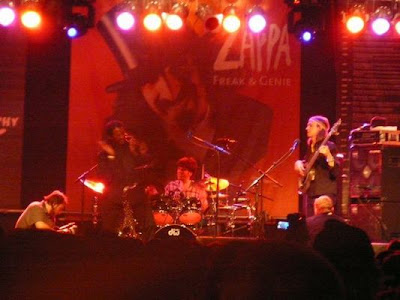 So tonight Project Object kicks off their two week fall tour at the Webster Theater in Hartford, Connecticut.

And, as you can see by Andre's press Release below, please note that the Saturday night show in Asbury Park has been moved from the Stone Pony to Asbury Lanes:

"This gig was pulled from the flames... and saved... Without getting into details -- certain "dark forces" seek to prevent us - and many others -from performing this music.. they will never stop us, until we are ready to stop and pass the baton. The show will always go on!! Frank asked for fans to PLAY HIS MUSIC and ...we will do our small part."

We are celebrating over TEN YEARS of LIVE Zappa Music...with the amazing people who recorded it!

Indulge me as I reminisce about what a special ride it has been!! Come celebrate with all of us again.....

Coming in Nov 2007 and beyond ....Look out for DELICIOUS on tour with Andre' and Eric Slick.. psychedelic stoner rock with a twist... Satans Jamband.
********
In case you are wondering about the "dark forces", well, I'd better keep quiet on the subject because it both infuriates and bewilders me and despite all the evil corporate alleged reasons for it, let's just say in my mind it all boils down to "hell hath no fury like a woman scorned"....and let's leave it at that...except that the woman in question would do well to use her *snort* clout and energy to fight the real war and evildoers in this country, not snuff out the creativity and careers of dedicated musicians who want to carry the torch of her brilliant late husband's music.

Oh. I see I didn't keep quiet after all. Too freaking bad.

Yo, Adelaide. Take a page out of John Lennon's book: Give Peace a Chance. And belated Happy Birthday to John, who would have been sixty-seven years old yesterday and probably would have kicked your ass.

I just smiled at a mention of the Project Object Asbury Park show this Saturday night on the Ween Forum Board under "reasons to go to the show":

By the way, I just noticed those Satans Jam Band shows are November 1, 2, 3 down in Asheville, North Carolina...well, I see the one on November 3 is at Stella Blue and is it a duo of Eric and Andre? Hmm...I will get further details on this one - looks veddy interesting...

Anyway, I need to make this an abbreviated post - I'm in heavy duty writing mode but I do want to take this opportunity to thank those of you who are purchasing my two books off of Amazon. I know those numbers aren't always realistic but both Three Days in New York City and its newly released sequel, Another Bite of the Apple have been doing very well....so well, in fact, that it's totally given me the needed impetus to work on the third book in this series, Bitten to the Core...and could I possibly be doing this for Hollywood? Hmmm...what do you think?

I just noticed that Google Books has a huge excerpt on my author page in case anyone wants a bigger "taste" of Another Bite.

And I will have more on this later today or tomorrow, but it appears I may be actually moderating the panel at Philadelphia Stories Push to Publish this Saturday instead of "merely" sitting in as a panelist...oy...as I just wrote to their editor in chief, does this mean I need to come up with questions instead of just answering them?

I believe it does. And yeah, I'm into that!