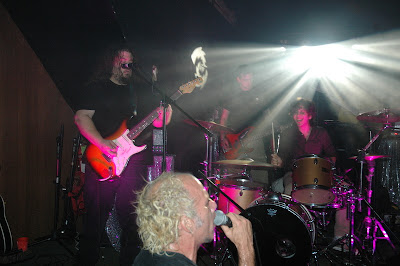 Eric Slick performing with yet another band, Sound of Urchin at the Fire in Philadelphia on Friday, October 26, 2007

"Eric slick played "Spirit of the Radio" with the boys. He "winged" the shit out of the song, truly awesome!!" Photo and comment from the Ween forum board

Or is that an oxymoron.

So it's been a couple of crazy days at Casa Slick - in fact, Gary is on his way to the airport with Eric right now at 6:00 a.m. - Eric's got a gig with Delicious (yes, I know, add one more band to Eric's resume) this Sunday in Asheville, North Carolina at Stella Blue.

I kind of picked a bad time to stop blogging for a few days as I just found out I'm nominated for The 2007 Web Blog Awards - Best Diarist -- and thanks to the fabulous Jon Swift for nominating me (by the way, Jon is not his real name and he's someone famous - I think I have figured out who but I'm not saying) anyway, whether I'll make the finalist cut this year (to be announced this Wednesday) I do not know...if I'd had advance warning I'd have posted me doing some lap dances, etc.

Not. And I'm not in an especially festive mood, either...in fact, quite the opposite.

So the weekend started off great - I got a lot of writing in on Friday while waiting for Eric to come home from touring with Project Object - he was supposed to be back from Cincinnati on Thursday night but it was just too long a drive so he stayed overnight at keyboard player Eric Svalgard's house in Wilmington. Then, Eric, Julie and I went out to dinner with my friend Donna and her two daughters who are Eric and Julie's age, both vegetarians, and one of daughters goes to Drexel with Julie; her other daughter works there. So we all had that and much more in common and we had a blast, though naturally I was the village idiot and drank over my limit - that is, I had two beers, not one, and it was Chimay, which I swear is grain alcohol disguised as beer. Poor Eric, though...he was literally home for the first time in three weeks after spending hours and hours on the road and I basically dragged him right out the door for pizza with my pals. We ate at the fabulous Mama Palma's at 23rd and Spruce Streets because they have awesome vegetarian pizza combinations and also vegan pizza with soy cheese, especially cool as Donna's daughter Dana is also a vegan. But I didn't have to worry about Eric being tired - right after dinner he went to a classical Renaissance concert with his pal, Rich, then he headed over to the Fire where he sat in on a song with Sound of Urchin. Hence the above photo, the link for which was sent to me by my cool friend Joe...and you should click the link to his blog because he's got some neat stuff in there - and he even turned me onto a New York City hotel I didn't know about called The Pod which sounds like fun and right up my alley - Julie and I do a NY overnight trip every year during the holidays (and yeah, yeah, I've blogged them all, including my famous Oh My God I think I accidentally just ate a dog panic attack of 2004 and last year's stay at the Hotel of Horrors - see December archives for every year I've had the blog and there's a classic Slick Christmas tale in each...at the moment I'm thinking I should turn them into a holiday novella after a quick re-read and a sobby walk down memory lane).

Getting back to Eric, he then headed back to Wilmington, Delaware for the night because he's now teaching drums while on tour hiatus at Wilmington School of Rock.

He came home from a day of teaching Saturday, jumped into a costume, and then played a Halloween gig at the Black Lodge in Philadelphia and arrived back here sometime in the wee hours of Sunday morning.

I woke up pretty early Sunday morning and he's sitting on the sofa and so is Julie and I could tell right away that something was very wrong. My mother radar was on high alert just looking at their expressions -- and yes, the news was horrific. I don't want to get too personal here but they sadly informed me that someone from Rock School had passed away suddenly over the weekend - this was not only a good friend to Eric, she was also his student and also someone Gary taught/mentored when he was assistant music director at the Rock School Beatle show in 2005 and she was one of his best kids. So our family is heartbroken and while I am sad that Eric is on his way to Asheville now and won't be able to attend the wake/funeral, in a way I'm relieved because I don't care how old my kids are...I try and do anything and everything to shield them from pain, impossible as that might be. Of course the truth is, Eric really wanted to go to her memorial service, so I'm in pain for him in that regard, anyway, as I know how devastated he is and wishes he could be there. There's a very moving tribute on the School of Rock forum board for anyone interested though I have to warn you in advance, it's gut wrenching though yet another example of the extreme closeness and almost other worldly love of the Rock School family.

Then I read a note posted at Zoetrope Studios yesterday that an extremely talented young writer I knew who was battling cancer the last couple of years had passed away this weekend, leaving a daughter and a brokenhearted best friend of many years - another writer from Zoetrope I really love -- so I've basically spent the past forty-eight hours asking myself WHAT THE FUCK.

I have no answers. Just the usual advice to myself. Love my family - appreciate every second, every minute I am with Gary, Julie, Eric, and Monty dog...and ugh, cliche coming but it fits...don't sweat the small stuff because it just doesn't matter and I am completely unable to tolerate anyone who does.

Here's to better days ahead...

Email ThisBlogThis!Share to TwitterShare to FacebookShare to Pinterest
Labels: Crazy as usual at Casa Slick and had I known I was a Best of Blog nominee I would have webcammed a lap dance...or not
Newer Post Older Post Home