This is one of my "rare gems". If you've seen the movie Rock School, the film culminates with the Rock School All-Stars, who, at the time were twenty kids, two of whom were a 16 and 17 year old Julie and Eric, going to Germany to perform at Zappanale, a festival held every summer to pay tribute to the music of Frank Zappa. I tagged along with the kids that year -- it was 2003 -- and here's a pic I've posted before where I'm posing in the town square with a couple strange guys looking on, and which town square, instead of having a bust of a war hero, has this: 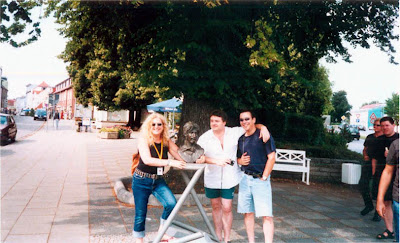 Anyway, this You Tube is part of a film that follows the legendary Ike Willis on tour through Europe that summer, and if you look closely, there I am drinking beer in the background right after Mike Keneally was interviewed; you can briefly get glimpses of Julie and Eric...and then a nice large chuck of Eric playing the vibes on stage.

So when I first met Ike that year backstage, the two of us bonded right away and when he heard Eric play with Rock School -- and Eric had just turned 16 -- he looked at me and said "That boy is on the list. You mark my words."

"The list?" I asked, because, well, in spite of my claim to fame as a musicologist, I had no idea what he meant.

"It means someday your boy and I are going to be in a band together. He's going to be my drummer."

I grinned from ear to ear like the proud groupie/stage mother I am and strutted around Germany for four days on a total high from that statement, but who could have predicted that it would come true. Because as well as being drummer for the Adrian Belew Power Trio, Eric is also drummer for Project Object featuring Ike Willis on guitar and vocals, and in a perfect case of synchronicity, will be performing again at Zappanale this summer. This is the fourth time Eric will be there -- he played the festival in 2003 and 2005 with Rock School, 2006 with Adrian Belew, and in 2007 now he returns for what's actually a ten day tour throughout Europe with Project Object. Adrian was kind enough to schedule his summer touring with Julie and Eric around the Project Object tour so that Eric can do both. Pretty damn cool life my son has, huh. 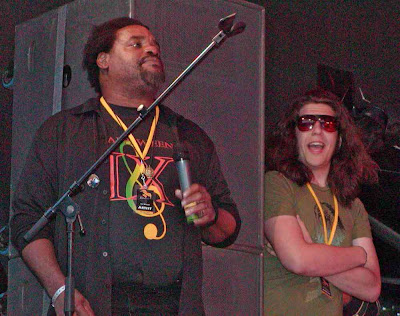 And that would be Eric and Ike in Germany during the summer of 2005.

And that would be Eric and Ike/Project Object at Martyrs in Chicago on January 5 of this year.

Anyway, if you are interested in buying some or all of the CDs or DVDs associated with any of the Zappanale festivals I mentioned above, just follow this link. Or this one.

So I guess apologies are in order. Sorry. The world's 5th best blogger, diarist, has not felt like blogging this week. I'm sick of winter, sick of having what I still feel is an unfinished novel, and well, I still feel sick in general. Even almost two weeks after the great stomach virus of 2007, I don't have my appetite back and without good food, I'm miserable. So I'm trying the high octane stuff like veggies and fish but really, I think I'm currently a head case who is better off burying said head under a pillow until this passes.

Let's see. What would help. An acceptance letter from somewhere. An award? A spike in my Amazon ratings for sales of Three Days? Actually, my Amazon ratings did spike, and for one glorious day last week, I was at like 66,000. Now I'm back at 500,000 or something. But I am still number one best seller here.

Oh, this helps, too.

Eric has a gig with Ween's Dave Dreiwitz in his side project, Crescent Moon at the Luna Lounge, 371 Metropolitan Avenue, Brooklyn, New York on March 24.

Here's a picture Gary took the last time Eric played with Dave in Crescent Moon back in December, 2006 at Mexicali Blues in Teaneck, New Jersey. Do they have the coolest stage or what? 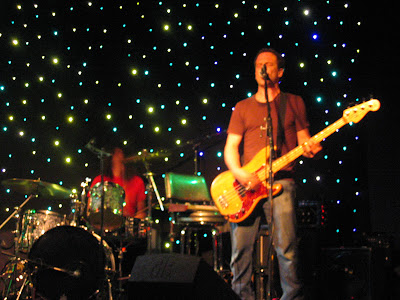 In writing news, I am pleased to give you a sneak peak of an exciting new print mag, Noveltown Review, in which I am proud to have a regular column and even prouder to see my name on the cover next to such luminaries in the writing world. (Note to founding editor N.L. Belardes: My column for Issue Two is almost done and I should have it to you by the end of the weekend).

Speaking of N.L., there are two things you should know:

One, please ask to be his Noveltown Review MySpace friend. They are going for a record 10,000 writers/fans/pals. And as I recently wrote to Nick, or N.L., that's one hell of a MySpace site and why oh why am I not able to do anything so creative with mine?

Secondly, you really need to buy Nick's book, Lords, Part I. I just received my copy and am currently being blown away. He's got other books for sale on his site as well but Lords is the first one I've purchased...you can be sure that as soon as I'm finished, I will be checking out any and everything else. Nick also keeps the world's most awesome blog right here -- in fact, he recently did an interview with yours truly and is probably still waiting for me to send him those "new, creative photos" he requested before he posts it so I guess I'll have to figure out something today. Both my kids shudder at the thought of taking my pic because I am so NOT photogenic I hate them all and make them keep re-taking them much to their mortification. Nick kind of let me off the hook and said, "Well, Robin, they don't have to be photos of you, they can be cool photos of stuff around your house," but then that would mean I have to straighten up around here today and I'm not sure if I feel like doing that or not.

In other writing news, I'm sad to be missing Epicon (a book convention in Virginia Beach) this weekend but am thrilled to be part of the RT Convention from April 25-29 and will be signing books all day long on the 28th. Check out what I get to do during this five day span:

What sets the RT BOOKLOVERS CONVENTION apart from any other convention? We understand the productive impact of mixing business and networking with fellowship and fun.

Begin each morning with a meet and greet mixer hosted by various authors and publishers. Then choose from a rich variety of over 125 informative workshops for readers, writers and booksellers. Cap off the afternoon with a fun-filled stimulating networking party. At dark, it's time to get ready for our sumptuous evening events.

Our Theme Events Include Magnificent Costume Balls and Dance Parties:

A Bevy of Authors Host The Medieval Faery Ball

(Yes, I will come dressed as Nicole Kidman. All I have to do is lose 100 pounds and the err..Jewish face)

Romantic Times Giant Book Fair - with over 300 authors signing their latest books. Our much anticipated Mr. Romance Competition - where fans will cheer on 10 romantic hunks as they compete for the 2007 title in several areas of competition: looks, pose-down ability (for a cover) and aptitude for romance; Romantic Times Awards Luncheon presented by Triskelion Publishing and their authors - and the Best Books of the Year.

(Excuse me? Mr. Romance Competition? Oh god, I'll be at the bar getting drunk during that one...as far away from that thing as humanly possible.)

The final day of the convention is Psychic Sunday which offers fascinating demonstrations that explore our spiritual pathways and psychic skills. Attend the talks and classes presented by energy healers, channelers, and psychics, some of whom are familiar authors. Learn meditation techniques that deepen your intuitiveness and creativity. There will be opportunities to meet privately with psychic mediums.

(Now that I am into. But only if they tell me 2008 will see me with a best-selling book and traveling the world)

(Ahem. Karaoke? Aha! The chance to sing in public without my family wailing and putting their hands over their ears? I'll do that after sitting at the bar for a few hours, too...what a shame it's not right after Mr. Romance is crowned.)

So while not all of this is my typical cup o'tea so to speak, it is a lot of fun though whether I'm showing up in costume for any of this stuff is pretty much a no brainer: THE ANSWER IS NO. I mean, this convention basically covers all genres of "romance" from chick lit (me) to paranormal stuff so a lot of authors dress as fairy princesses, vampires, you name it. So what I might do is switch out of black t-shirts and jeans to...gasp...a black dress, because that's as close to stepping out of my usual persona as I can do without compromising my integrity.

Har har. What integrity, you ask? Yeah, I know, I asked myself the same question, but seriously, there's no reason for me to dress up because even in my novels, my characters wear all black, too, so technically I'm following the rules and am attending in said character.

And with that comment, let's call it a wrap. Does this blogpost make up for my disappearance this week? Is it meaty, big, and bouncy enough?