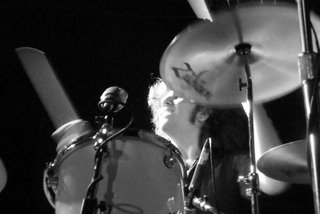 So just a reminder that there are two major events happening today:

(1) My son is going to be broadcast live on XPN and National Public Radio all across America from 12:00 noon to 1:00 p.m. eastern -- with Chris Harford and the Band of Changes featuring said son Eric Slick of The Adrian Belew Power Trio on drums, Dave Dreiwitz from Ween on bass, the brothers Ween themselves, Gene and Dean, and Scott Metzger, formerly of Particle. They will be interviewed and performing live at World Cafe Live, 3025 Walnut Street, Philadelphia, Pennslvania, as part of the WXPN Concert Series, to be broadcast nationwide on NPR as part of their Live Friday series. In case you cannot make it to World Cafe Life today, you can listen to a live stream of the show at the links provided for XPN and NPR above.

Here. I'll make it really easy for you. For the live stream at 12:00 noon eastern today, click right here for the WXPN link or here for the NPR link.

Hey, I just visited the NPR webpage to get that link, and they have a very nice write-up of the band:

NPR.org, December 6, 2006 · Chris Harford's music has been described as "beautiful, heart-wrenching and soulful," as well as "dark, rocking and dangerous." Regardless of the moods Harford's music evokes, his songs have a way of getting under the skin. Chris Harford & The Band of Changes -- backed by members of Ween, Particle and the Adrian Belew Band -- will perform a concert from WXPN and World Cafe Live in Philadelphia on Friday at noon ET.

Harford's newest CD, Looking Out for Number 6, was produced by Ween's Dean Ween and released in October. As for Ween, which is currently touring with Harford (and backing him during this performance), the group has spent the last 20-plus years cultivating a large and loyal underground fan base. Ween's countless recordings have run the gamut from primitive home-taping experiments to big-budget major-label hits; its latest release is a collection of outtakes and oddities titled Shinola, Volume 1."

Pretty cool, huh. And I just realized that if you are on the west coast or at work and cannot listen to the broadcast at noon today, it will be archived over at NPR at the link I gave you so you can have a listen in the future. Please let me know in the comments section what you think.

What you really want to also do is visit Chris Harford's MySpace and click on the song "Teach Me"...that's the single off the new CD and they'll be performing it today. Very cool song.

(2) Okay, voting has begun in earnest over at the Weblog Awards and I while I'm not writing my concession speech yet, I see I'm up against a blog named Dooce so popular she's got her own t-shirts printed up with her blog name and whatever the hell she is doing there with advertisers has made it possible for her husband to quit his job and be a stay at home dad. Note to self: Write this woman a letter and find out how she is accomplishing this! I mean, I did get solicited for advertising on my blog but I was under the impression it was, err, tacky. Now I'm thinking otherwise, though I would want places like CD and music stores and books and art for sale on my blog...oh right, they don't make any real money, what was I thinking. I mean, I do have links for the purchase of books on my blog -- like Neil Gaiman needs help from me though I could use help from him...like asking his readers to vote for me but I'd rather save any favors from Neil for like, Hey Neil, would you please contribute to the anthology I'm editing which will contain short stories and poems about sexual relations/situations between people over age 39? Ha! Seriously, I have books for sale on my blog merely to turn people on to my favorite writers, like Ellen Meister and Susan Henderson. By the way, see the link on the right hand side of my blog for Susan Henderson's Motorhead? It's been nominated by Amazon Shorts for a Pushcart! Way to go, Susan.

So anyway, now that I've totally rambled off topic, let me get back to the weblog awards. See that link on the right with the Finalist Logo? If you click on it, it will take you right to the voting page for best diarist, where you will see that I am currently getting slaughtered by the above mentioned Dooce as well as some other chick who I guess has a huge MySpace/Live Journal/Facebook following...she's young and bitchy and cute and oh my god she makes me feel old and bitchy. Ha! Nah, all of the finalists are great and I wish them all well.

I'm skipping around like mad here, but speaking of Susan Henderson, I see Part II of her interview is up at The Publishing Spot. I love what she has to say here:

"And if you read a story in a magazine that makes you gasp or tear up, instead of saying, "Oh, I should submit a story there," stop and appreciate the one you just read. And then write to that author or editor and tell them what you liked about it.

As soon as you stop making the world all about you and your career, you realize it's a rich and mesmerizing place."

Ugh, I know a delusional author at my former online writing workshop who needs to read what Susan wrote and repeat it to herself several times...bah...she, and other ME ME ME psychotics over there are one of the many reasons I left the site and call it my "former" workshop.

Oh god, and now after writing that after reading Susan's words of wisdom, I now have to again beg you to vote for me as best diarist? Ha! Perfect. The story of my life.

But..err...please? Again, the Weblog Finalist Logo on the right hand side of my blog...all you have to do is click on it and vote...and you can vote anonymously once a day...they don't even ask your name, email address, nothing.

What can I say? I should change the name of this blog to "Groupie Mom".

Oh...one final thing. This blog is actually named in honor of the late, great John Lennon, and his brilliant book of prose/poetry, John Lennon In His Own Write. Twenty six years ago today, he was assassinated by the CIA. A moment of silence in his honor, please.

Later,
xo
Posted by RobinSlick at 7:20 AM