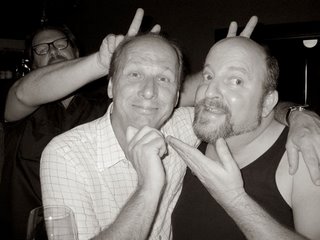 Anyway, the title of today's blog entry comes from this wonderful article I found this morning in the Santa Fe Reporter:

"The Love Belew
By Mark Sanders

Adrian Belew is walking around his back porch in the Nashville suburb of Mount Juliet, swatting away curious bumblebees and chatting on his phone. Occasionally, we are interrupted by his outbursts, which are G-rated but kind of humorous, too. He’s trying to stay on topic while avoiding the stingers.

Songs from many sides will rock the Brewing Company.

“I’m sorry,” he says, stopping himself in mid-sentence.

Obnoxious bees aside, Belew has lived in north-central Tennessee for 12 years because he loves it there. His wife’s family is located nearby. Plus, the Kentucky native says, he likes the rural vibe there—Belew saw two deer in his yard this morning, he says—adding that he lives in Mount Juliet because he has a studio there, where he records frequently.

“Frequently” is maybe not the right word to describe his recording schedule. “Obsessively” is more like it, since the past couple years’ worth of studio sessions have resulted in Side One, Side Two and Side Three, albums that show off the iconic guitarist’s different tastes.

As anyone who’s followed Belew’s career path can imagine, those tastes are fairly unpredictable. Belew’s career took off after Frank Zappa discovered him gigging in a Nashville cover band in the late ’70s, after which he began touring and recording with David Bowie, Talking Heads, King Crimson and, more recently, members of prog rock bands Tool and Primus.

Drummer Danny Carey and bassist Les Claypool (of Tool and Primus, respectively), backed Belew on Side One and Side Three, albums that show off the artist’s more experimental side. British Invasion-era rock is wrapped in electronic blips and synthesizer noises on some tracks; most songs, such as the cumbersomely titled “The Red Bull Rides a Boomerang Across the Blue Constellation,” show the 56-year-old guitarist in prime form, and not giving a damn about mass appeal.

Nevertheless, a healthy number of fans continue coming to him, and not just because he’s the guy who backed Bowie.

“They’re not being serviced by the mainstream,” Belew says between swats. “They’re music people, and they really want to hear different kinds of live music.”

“So now you have bands like Ump­hree’s McGee and Tool and Primus, and they’re fans of what I’ve been a part of.”

The fact that Belew has had such a big influence on bands he’s played with is something the artist has thought about. Especially in his current band, a trio that includes musicians still under the legal drinking age.

Philadelphia natives Eric and Julie Slick are a brother and sister who studied at the Paul Green School of Rock, located in their hometown. As top players at the school, the Slicks got a chance to study under Belew, who was encouraged by School of Rock founder Green to consider taking them on tour.

“I flew them down here to audition,” Belew says, now a few months after the fact. Eric is 19; Julie is 20. They weren’t even born until Belew’s career was already firmly established.

“They don’t even drive cars. They’re really just consumed with music. We play from different segments of my solo work, and end with my King Crimson work. The challenge of that is to deliver it in a power trio format.”

All of it happened unexpectedly; Belew never really anticipated plucking two young musicians out of their hometown to go on tour with him. Thinking aloud, the guitarist relates the experience to his career path. Which is to say, nothing was ever planned.

Belew left his last non-music-related job when he was bassist Julie Slick’s age, 20. He worked at a furniture factory, where his father was a foreman. “Oh my gosh, I’m happy I’m not doin’ that,” Belew says, “inhaling sawdust all day.”

While on tour with Zappa, Belew met David Bowie, who subsequently had him play on his late-’70s albums Stage and Lodger. At the same time, the Talking Heads hired Belew to play on their iconic 1980 album Remain in Light. Soon after, the guys from King Crimson called.

“I thought I’d go about things the way that most musicians do: Put together a band…” the guitarist says, trailing off.

He adds, “It worked the opposite way for me. I worked with famous people first, then formed my own band.”

Now, the artist who is best known for those he’s worked with is standing firmly in the limelight. It’s a matter of timing, Belew says.

“Over the past four or five years, I was putting a lot of time into resurrecting King Crimson and, to a lesser extent, [Cincinnati-based experimental pop group] The Bears. I’d record between the cracks of other work I was doing.”

Gradually, Belew says, he realized he had 30 or so quality songs. The result was the Side albums and, now, tour dates with the Slick siblings.

Unexpected as it all was, Belew takes the developments in stride. Besides, the fact that he’s playing with musicians less than half his age is just testimony to his own outlook.

“I never take myself seriously as a full-grown adult,” he says calmly. “I’ve been associated with 100 or so records, but I’m still a kid. I still challenge myself with ideas. The kid in me is still very much in charge.”

And here's another fan review I found:

"I’m sitting here writing this in the odd confines of a service department waiting room. I wanted to get this down while it’s fresh in my mind. Last night, (Wednesday night), Jeff and Ryan and I went to see Adrian Belew live in Dallas at the Granada Theater. They were good sports for coming along, even though I am the one who is freakishly fanatical about Belew and his music.

First of all, the Granada. I had never seen a show there before. It was surprisingly easy to get to and parking was so easy it seemed like we were committing a crime, parking for free no more than thirty yards from the front door. And the usher was tearing our tickets just as Adrian and his two young musical co-conspirators were beginning their show with the blistering “Writing on the Wall.” We could not have planned the pre-show timing any better. The Granada is in a part of Dallas that reminds me of Western Ave in Northwest Oklahoma City. The venue itself is reminiscent of the Will Rogers Theater.

It was rather bizarre to walk up into a mostly empty balcony with the crushing rhythm of the Adrian Belew Trio as the soundtrack. I can’t describe to you the rush of walking into that room and seeing and hearing one of my musical heroes in person, so close that he could possibly see and hear me. It was just surreal. Until last night Adrian Belew didn’t even exist in the same plane of reality for me. He existed in my ears, on CDs, on King Crimson DVDs, but not in the same three dimensions as me. It didn’t seem possible. (Do I sound like a fanboy yet?)

But there he was, pulling off that strange beautiful music with more power than I had experienced before: the subs pumping when Julie Slick would play low down on the bass. (Insert comment about testicle-rumbling bass tones here.) We discussed in the car on the way down about the vague “something extra” that accompanies seeing music performed live. And I know I was certainly transfixed for the whole show. I know this music really well, so I can’t possibly give a clear, unbiased account of what occurred, but I can speak in some generalities.

The venue felt like just the perfect size for this group. They weren’t swallowed by a cavernous space and the mix was pretty clear and powerful the whole time, the vocals pretty comprehensible, those magnificently weird guitar sounds up front. As far as material, most of the Crimson standards were represented—Jeff and I sharing knowing looks during his new faves-“Dinosaur” and “Three of a Perfect Pair,” which sounded really powerful, as did “Frame by Frame” and “Elephant Talk,” off the Discipline album. The Belew solo material focused on the newest Sides 1-3 stuff: “Drive,” “Ampersand,” “Beat Box Guitar,” (which I have just recently come to love), and “Matchless Man.” But I was very pleased to hear some middle period stuff like “Of Bow and Drum” off my favorite album Op Zop Too Wah, which Adrian said he never got a chance to tour behind and “Young Lions,” both of which I didn’t expect to hear.

It’s quite a thrill to see music like this stuff pulled off live with such aplomb. Adrian seems to be having a good time up there, with his young band, making those odd meters and guitar gymnastics look pretty easy. And I haven’t even begun to discuss how great his voice is. But all things come to an end, as this concert did. (I could have listened to them for another hour and a half or so, my love for the music is so great.) And Adrian ended the show a little oddly, by improvising some loops with synth and guitar and creating “walk-off music” for the audience, inviting them to leave whenever they wanted to or hang around and listen to the music “do its’ thing,” betraying the musical Minimalist mindset that I have come to know and love over the years.

I haven’t smiled so much during a concert in a long time.

It was pretty easy for me to stay awake for the three hour drive back home."

So that's the Belew part of my day; I do have some other stuff to report but I need to do some...gasp...domestic goddess duties around here so I can write in a nice, calm, clean, tranquil environment (for like the first time ever...I'm serious...this really is the first time in my life I'm alone for two weeks with the family out west on tour and I don't think it's entirely hit me yet. Right now it's kind of...weird).

Maybe later?
xo
Posted by RobinSlick at 8:25 AM