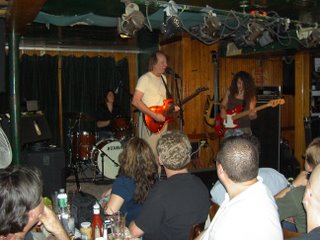 Thanks to "Jim" from Piermont who saw the show and was kind enough to forward me the above photo, as well as this e-mail:

Great show at the Turning Point in Piermont last night. You have two VERY talented kids."

Speaking of e-mails from appreciative fans who've been catching the shows on this tour, they continue to pour in, so I'd like to share some more of them here:

"I travelled 500 miles this week -- from Maine to New York -- to let
my 16-year old son, Alex, experience Adrian Belew, a real treat for
any young guitarist.

And, yes, the show was unforgettable.

But the highlight was when your son walked across the stage and gave
my son one of his drum sticks. He will never forget it.

You have two amazingly talented children -- a real gift to the world."

From Carl Wurtz of Indiana to Eric, a copy of which I received:

"I'm a huge Adrian fan. I was very fortunate to see your show in Indy. Honestly, I was blown away. Even though I know how great he is, he is still astounding.

As a drummer myself, though not as good as I once was, i enjoyed watching your command of the drum set. I know how difficult it is to play King Crimson song, because I am pretty much unable to, and you handled them with skill and apparent ease.

And what can I say about your sister, the power she exudes from the bass was
unbelievable. Her range of material was quite impressive as well..."

Here's one that really thrilled me, from Josette, John Hawken's woman -- and click on her name...wait until you see who she is...I need to get back in touch with her and swap some stories! Teaser: She went on the road with Jimmy Page at age 16 and never looked back:

"I see your children are playing on Monday in Philadelphia... I'm going to see if John can go and check out the ticket availability and hopefully we'll see you again there. John never saw Adrian play live, and I mean it when I say he was TOTALLY blown away by your daughter and son. Even with the complexity of what Adrian was doing, he kept whispering in my ear, referring to your children, "did you hear what she/he just did!!?? That was BRILLIANT!"
xoxoxo
Josette

I almost died when I read that.

Here's another from "tohu":

" I was there, Tuesday night (wouldn't have missed it for the world!)...

You have EVERY reason to be proud - It wasn't Julie & Eric's technical virtuosity relative to their ages alone which amazed; but the FEROCITY of their playing, the manner in which they stood toe-to-toe with a man like Belew! My skin was raised in goosebumps, through the first three songs!

Julie's equanimity, while pounding out these fierce songs played originally - remember, all! - by the likes of Tony Levin & Les Claypool, was stunning...The Crimson-y encore, with Thela Hun Ginjeet & Elephant Talk (with Julie hammering-on the part originally played on Chapman Stick by Levin), after an intense set of metrically & melodically tricky songs, let all of us Crimson/Belew fans stunned...

And Eric appeared as nothing less than the next Terry Bozzio, lifting up from his stool, as Bozzio would, smacking & then tamping cymbals, and working beautifully with that snare & the double kick pedals...

It was a privilege to see your kids, that night; and, believe me, they'll have a lot of people following their careers, looking for their names, in the future--just as people followed Belew or Bozzio, after their tenures with Zappa..."

That one caused me to burst into tears as well.

Then, I heard from John Wilcox. Click on that link for some amazing photos and review, but of course I'm going to post the review here anyway because you know I'm way too proud to merely post a link:

Money in the bank is the phrase. If you have a stage & Adrian Belew, you're all set. With King Crimson, with the Bears, or solo - it doesn't matter. Your ears are guaranteed an adventure. This time around, it was Belew's power trio, rounded out by 19 year old drummer Eric Slick and his 20 year old sister Julie on bass. Don't let their youth fool you - this rhythm section kicked colon!

The set featured songs from Belew's recent Side 1, Side 2, & Side 3 albums as well as a few older solo gems, and a clutch of Crimson numbers. Writing On The Wall, Dinosaur, &, and Young Lions kickstarted the evening. The Slicks were rhythmic devils propelling Beat Box Guitar into overdrive. Another new tune - Matchless Man - followed. The crowd shouted out for Zappa & Belew paid tribute with a verse from City Of Tiny Lights before jumping into Madness.

The Slicks left the stage to Belew and he revved into Drive with included a section of the Beatles classic Within You, Without You. Next was a heartfelt Lone Rhinoceros that drew cheers from all. A trio once more, the band plunged headlong into a smoking take of Of Bow And Drum and a superfast version of Big Electric Cat. The main set closed on a Crimson note: Frame By Frame & Three Of A Perfect Pair. Encores were Elephant Talk and Thela Hun Ginjeet. Belew was all smiles & playing the neck off his Parker guitars all evening. Julie & Eric Slick were packed with energy & seemed to bring nothing but joy to Belew as well as the crowd. I want more!"

Thanks, John. That was amazing.

Also, A.D. Amorosi had this to say in the City Paper this week:

Rock/pop
By now, you know Adrian Belew — guitarist, art squawker extraordinaire — formed a power trio with two alums from Philly's Paul Green School of Rock. You know because I announced it here. But what do you know about bassist Julie Slick other than that she produced Thom Lessner's Sweatheart CD? Or her drummer brother Eric other than that he's part of the Project Object and Ween universe?

Julie, 21, and Eric, 19, played shows with Belew (known for stints with Zappa, Fripp and T-Heads) at New York's Knitting Factory in March. It was love at first kerrang. Eric gives tops of the props to Green for pushing the drummer to audition twice for Belew. "Especially since I chumped the first one." Within weeks, the trio would be ready to tour with its circa '68 Jimi Hendrix Experience vibe.

"When I found out I was in the band, my initial reaction was, "How could we possibly do this music as a trio?" remembers Eric, thinking that the density of Belew's complex musical structures and heavily orchestrated layers of sound was a near impossible fit for three peeps.

"Adrian proved my theory wrong though, as he's a forward-thinking individual who manipulates all of this brand new guitar technology in order to create a pocket orchestra" says Eric.

As for Julie (who has played with McRad) she too had been pushed by Green to impress Belew. But she was even more surprised than her brother by the immediacy of the invitation. "Paul called me and asked me if I had been practicing. I said, 'Yeah, of course.' 'Good well, how'd you like to be in Adrian Belew's band? You have to learn 15 songs and go down to Nashville this weekend to practice them.'"

The 15 songs were mostly from Belew's new CD, Side One — recorded with Les Claypool on bass and Danny Carey on drums. "Talk about being intimidated," says Julie.

Do you think I'm a little bit excited about Monday's show in Philadelphia?

I know I'm leaving stuff out - I have more emails, reviews, photos...but fear not, I will come back and add stuff over the weekend.

Oh yeah, Eric has updated his tour blog! And Sid Smith at DGM Live has noticed!

Later,
xo
Posted by RobinSlick at 8:42 AM